Commonly known as Vic West, it’s an historic neighbourhood on Vancouver Island, inside the city of Victoria. This area has water on three sides and is just a bridge away from downtown Victoria. There are lots of recreational activities to do here including swimming, cycling or just walking around the neighbourhood or inside one of its parks. Victoria West has a population of a little over 8,200 people where most have a median age of 40-45.

Since it’s by the water, you’ll find hotels, restaurants and bars with beautiful views. One such hotel is the Delta Hotel by Marriot Victoria.

If you’re a dog person, you’ll love the fact that Victoria West is home to the Songhees Hilltop Dog Park. And if your pooch likes the water, take him with you down to the Victoria International Marina, located just down the street from the dog park. 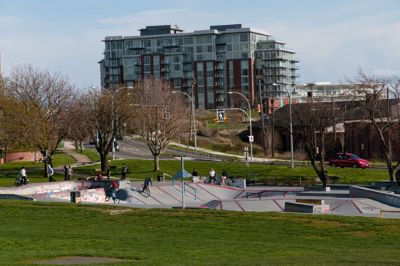 The Vic West Skate Park is located on Esquimalt Rd and has a massive 35000 sq ft area which makes it one of the biggest skate parks in the region. The park has a huge street course with a range of obstacles including different sizes of rails, stairs, ledges, transition elements, plaza section, and a 7ft capsule bowl with exit and entry points.

The west area of the park was also remodeled in 2016 which significantly boosted the appeal of the area. What’s more interesting about it is that it stays open 24-hours a day and 365 days a year, providing the Vic West youth with a massive space to skate and have a good time.

There’s also a possibility that the Vic West Skate Park get further upgrades as the youth of the locality actively use it during their leisure time. There are picnic areas, family benches, and tracks placed around the park. Towards the far end of the park, you can see the small body of the ocean that is connected to Rock Bay; another great place for a picnic. The gist is that the Vic West Skate Park is not just for the young blood, people of all age groups can visit here and have a great time.

Browse the next Victoria area neighbourhood.

Driving Directions: Continue along Esquimalt Rd over the Johnson Street Bridge until you get to the Patricia Bay Highway. Turn left on Blanshard and you’ll see Topaz Park on your right 2km up the road.